Our football team achieved a great amount of success this year not only on the field but in the classroom and more importantly, for Christ. Postseason awards are starting to be released and our team and several players have been recognized. 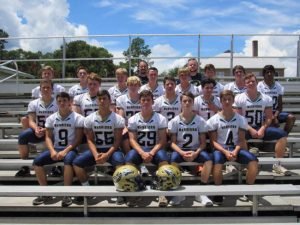 For the second year in a row, our football team was named Academic State Champions with the highest team GPA in FHSAA Class 2A. The team also reached the FHSAA Playoffs for the first time in 13 years and hosted the second ever playoff in school history (the first since 1993) in addition to being named Co-Conference Champions. Coach Roberts states, “I’m extremely proud of this year’s team and their accomplishments but more proud of how our kids reflected Christ. I contribute a large amount of the success we obtained to the kids embracing our theme verse, Colossians 3:23.”

The below members of the team received individual recognitions.

Congratulations Coach Roberts and players! We are super proud of you and your accomplishments!